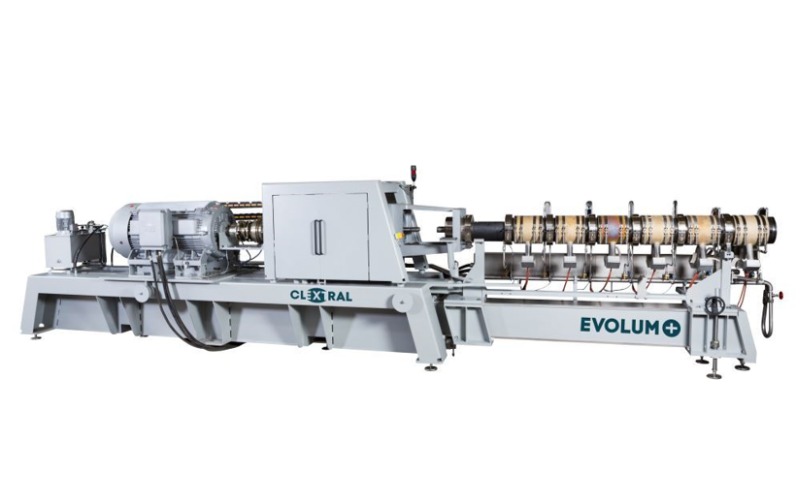 The Extrusion process is a thermo-mechanical process that consists of forcing a product to pass through one or more holes of a specific size under pressure and temperature thanks to the Archimedes screw concept (also known as "endless screw").

The extrusion processes in the processing of extruded pet food and aquaculture, aim to achieve the cooking of the mixture of raw materials and ingredients giving it the form of croquette (pellet / kibble) that facilitates its subsequent handling.

The most important things that take place inside the extruders are the gelatinization of starches and texturization of proteins, both processes help to the greater digestibility, as well as to form a structure and texture that hosts other ingredients, minerals, fats in a stable and uniform way.

For a good gelatinization of starches and texturization of proteins moisture is needed (the one that is added in the form of liquid water and steam in pre conditioning and / or extruder), temperature is needed, part of the temperature input is given by the addition of steam, but the most important is carried out by the mechanical and friction work produced by the screws. And mechanical energy is also needed, granted by the shearing action of the screws.

Today there are two technologies available for extrusion, these are single screw (SSE) and twin screw (TSE). In this article we will talk about the features, advantages and disadvantages of each of these technologies.

In Single Screw Extruders we observe as a characteristic that the advance of the screw moves the materials through the channel by developing a “drag flow”, whose speed is directly proportional to the speed of the screw. Due to the constraint of the die in the discharge of the extruder, there is a "backpressure flow”, which goes in the opposite direction to the drag flow. Therefore, the “flowrate" in single screw extruders (SSE) is equivalent to the drag flow rate – backpressure flow rate.

The flow dynamics in the screw channel shows us that the fluid particles travel at different speeds and that they do not interact in their entirety, resulting in a dispersion of dwell times and an uneven mixture.

Consequently, the heat transfer as well as the entry of mechanical energy in the cooking section are very limited. In addition, the length of the shear depends on the space, which generates heterogeneities of the melting properties (cooking duration, temperature and pressure).

In the TSE, a very intense mixture is observed in the coupling area of the screws (macro mixing and micro mixing).

Consequently, the heat transfer coefficient in the sections is very high. Homogeneous fusions can be obtained, with a very good link of lipids. The expansion after traversing the die develops consistently, leading to an excellent density, texture and shape of the product, as well as a uniform final density and color.

Both extrusion technologies are widely used in the pet food and aqua feed production sector.

While the Twin Screws requires a higher investment that brings as advantages the possibility of working with a wider range of raw materials, with more fibers, more vegetal proteins and higher fat content.

Who do we work with?