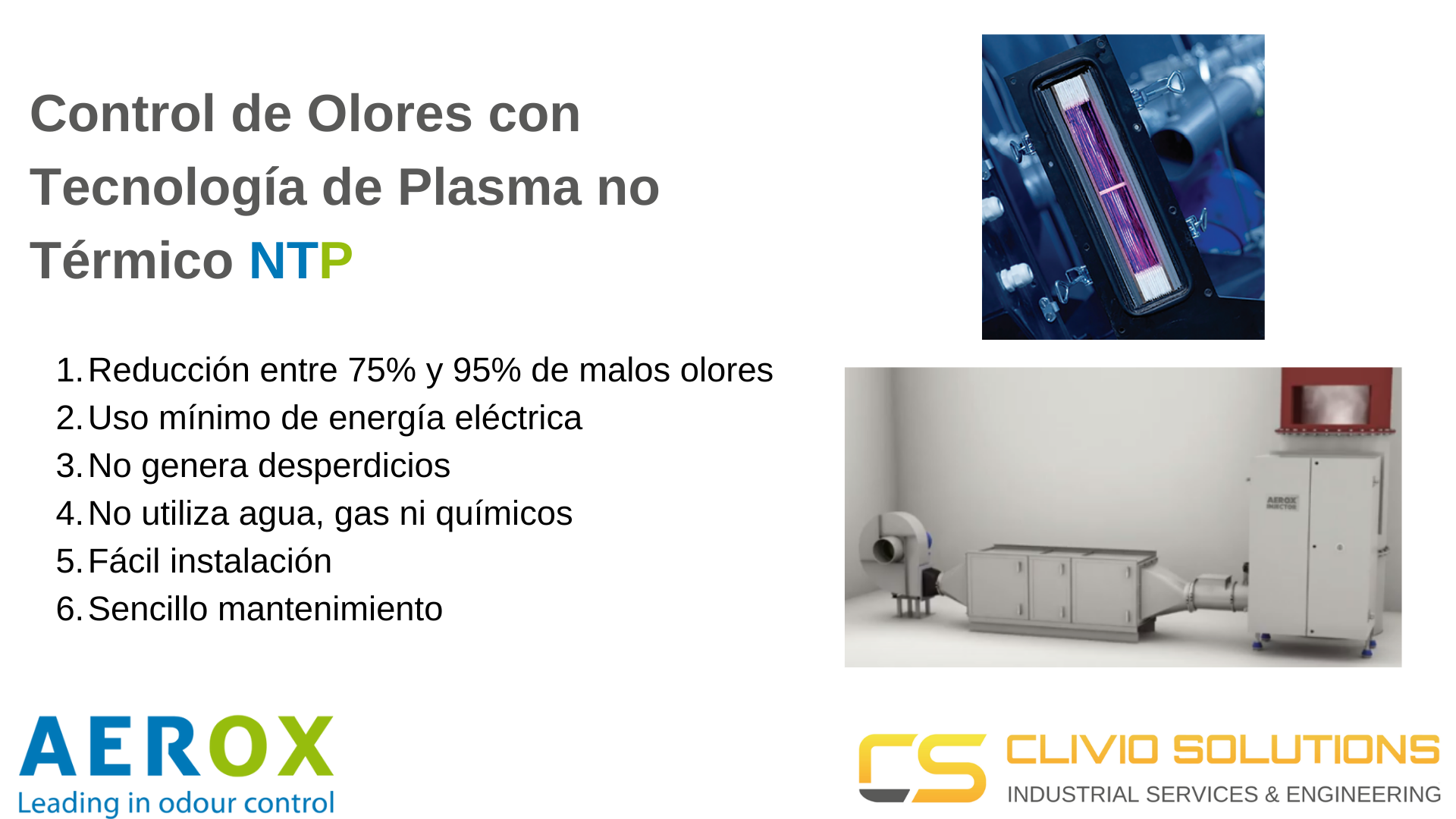 With the increasing amount of people living on earth and the higher demands that we have on our living environment, odor control is getting more and more important. In certain industries, odors cannot be avoided during processes like extruding, drying or cooling. Especially in aquafeed production where smelly ingredients are used like fishmeal, a lot of odor is emitted via the exhaust air of those processes. To have fresh air for your neighbours and/or comply with odor legislation, odor control is often a necessity. A common and effective used technique for odor control in the aquafeed industry is the Non-Thermal Plasma Injection technology (NTP).

What is non-thermal plasma?

Plasma is commonly known as the fourth state of matter, alongside liquid, solid and gas. It is made up of ionized gas, which consists of a balanced mix of electrons, positive ions and neutral particles. Due to the highly energetic state of the constituents of plasma, it produces its own electromagnetic radiation. Aerox developed NTP-modules that generate NTP by electricity. Since NTP operates at room temperature, relatively little electricity is needed, ensuring a sustainable and cost-effective odor control solution. The NTP does not generate a significant temperature increase in process airflow.

How does it work?

Ambient air is cleaned using a three-stage filter (Fig. 2) and then pushed into the injector cabinet where it passes through the NTP-modules. Within the plasma modules, oxygen and water vapour molecules are split, transforming them into active oxygen. This highly reactive mixture is then directly injected into the process air exhaust duct. The active oxygen in the injection air executes a high-speed oxidation reaction (< 0.5 seconds) with the offensive odor molecules inside the process air, creating less smelly or undetectable molecules, solving the odor problem.

To reduce the odor emission coming from the processes of aquafeed production one can choose to treat the most relevant odor emitting sources like the extruder, dryer and cooler or one can choose to treat all the odor sources. In most cases, the most relevant odor sources are treated by an odor abatement system like the NTPsystem. To establish the best way to solve the odor problem, these questions should be answered: How many production lines does the plant have? What is the airflow of each line/source? Are results of odor measurements available? After having these questions answered, we can estimate what capacity of the Aerox-Injector NTP system is needed. To verify this estimation a pilot test can be performed including independent odor measurements to check the odor reduction efficiency of the system. With the results of this pilot test, the optimum capacity of the NTP system can be chosen. The NTP technology is especially suitable for the aquafeed industry because the odorous components are adequately converted to less odorous components achieving an odor reduction of 75% - 95%

The design of NTP units makes it easy to recycle almost any part of the unit. The NTP modules need to be replaced after a certain period. The modules are made up of glass, metal and plastics which are, if correctly separated, easy to reuse or recycle. When the modules are to be replaced, we aim to reuse as many of the modules as possible. The parts that cannot be reused directly are recycled which means that not one part is wasted completely.

The NTP unit does not need any fossil fuel, chemicals or water. All the unit needs is a relatively small amount of electricity to operate. Since no water and chemicals are used there will be no wastewater stream. In the current life, more and more things are automatically controlled. Implementing automated controlling by using the right sensors not only reduces time for the operators but can also contribute to energy savings. By using Internet of Things (IoT), it is possible to control the unit, e.g. using a windvane, the unit can be shut down when the wind direction is in the opposite direction of a nearby urban area. Using such tools even more energy can be saved. With increasing prices for tradable carbon emissions and fossil fuels, the use of sustainable solutions for odor control is getting more and more important. Using an NTP unit solely on sustainable energy the CO2 created by the unit can even be reduced to zero (calculation based on Dutch averages).

Since odor can be a significant nuisance for people living close to factories or is an environmental problem, it is high on the list of priorities within companies across many industries. Corporate image and social responsibility also contribute to the fact that companies are reducing their odor emissions. The odor impact (odor emission) at ground level can be calculated using a dispersion model. Figure 4 shows odor dispersion modelling graphics with a significant reduction in the odor contours by a 75% odor reduction on emission level.

By reducing the odor emission with such a significant quantity, factories will reduce the risk of getting odor complaints from their neighbours and are able to comply with the local odor legislations or environmental permits. 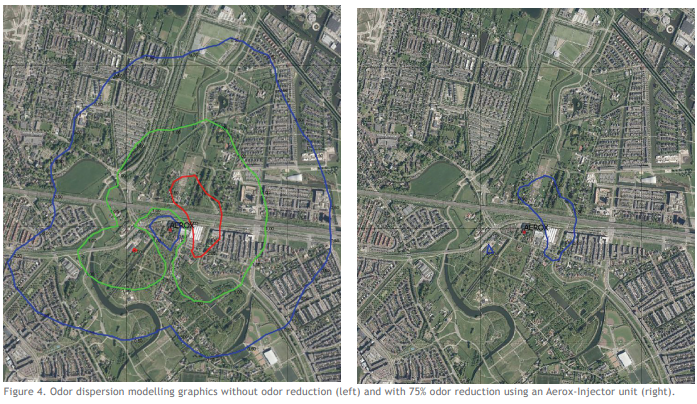 Our aim is to run the Aerox®-Injector on as few resources as possible while keeping the installation as small as possible. Our environmentally friendly odor control unit runs completely on electricity and nothing else. It is, therefore, compared to units that use fuel, water, or chemicals, better for the environment. One of the biggest advantages of cold plasma technology is that the ionization process starts at room temperature, usually combustion is achieved at much higher temperatures. Therefore, relatively little electricity is required and the CO2 emission remains low. By continuous research, we keep trying to further lower its energy consumption as well as minimizing its size.

In addition to the benefits of sustainability the NTP unit has several other advantages. The Aerox-Injector NTP unit is a compact industrial odor reduction unit, converting only a small air volume into active oxygen. Nevertheless, direct injection allows treatment of high volumes of process air (up to 200,000 m3 /h). The injection technology makes it easy to integrate into the production process. Due to the injection technology, there is no direct contact between the process air and the generated plasma field and therefore the NTP-modules stay clean, reducing precious time which would otherwise be spent cleaning the odor abatement system. The unit can easily be switched off in case of a production stop.

With the NTP unit, the exhaust air from extruders, dryers, coolers, hammermills and coating can be treated with a typical odor reduction achieved in the aquafeed industry of 75-95% and a typical volume flow rate to be treated with one unit of 60.000 m3 /h. As an odor abatement solution provider Aerox wants to provide the best available solution for its clients. Due to our globally large installed base, the validation tests and pilot tests we have performed, a large database is available to give the best service and advice to our clients

Your questions are welcome and at CLIVIO SOLUTIONS we are always at your disposal and interested in helping you.

If you want to receive a proposal, you can complete the following questionnaire: