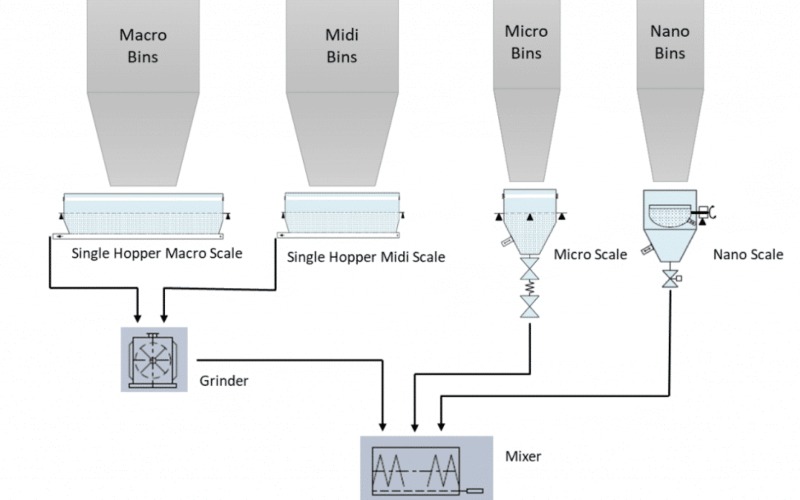 The production of animal feeds is a typical example of a discontinuous production process that employs a process of batch and semi-continuous operations.

The bottle neck in many feed mills is the macro- and midi dosing cycle. This bottleneck can be avoided by employing a Jesma solution, where you at the same time optimise your batching operation, as well as, the dosing accuracy.

Included in the typical feed mill

Centered in a feed mill process, you will find the batching, dosing, weighing and mixing process.

A batching system is typically based on an operating average of approx. 10-12 batches/hour corresponding to 5-6 min per batch. When calculating the total batching time, the emptying of scales and conveying systems need to be included.

When calculating the total batching time cycle it is necessary to include the following operations:

* To avoid cross contamination between different batches and production orders the scale and conveying lines should be cleaned by running the chain conveyors and bucket elevators for some time after the last product has discharged from the hopper scales.

As mentioned previously a typical feed mill batching cycle is 5-6 mins and the bottleneck in many feed mills are the macro and midi dosing cycle.

To eliminate this bottleneck Jesma has developed solutions in which the batching operation, as well as, the dosing accuracy can be optimized.

Option one – replacing the single macro-midi scale with a Double Hopper scale:

The single hopper macro and midi scale can be replaced by a double hopper scale.

The advantage of this solution is that you can run two operations at one time: dosing into the weighing bin (each ingredient dosed one by one) and at the same time empty the after bin below.

The time gained by this solution is approximately 40-70 seconds which is the equivalent of the time it takes to empty the macro/ midi scale and transfer the batch to the next step. This solution will in most cases also improve dosing accuracy.

In some instances, it will be possible to install one or several smaller scales at the top of a Single Hopper Scale. This allows dosing of more than one ingredient at a time – thereby reducing the dosing time and at the same time improving the dosing accuracy of the given ingredient.

The time gained in relation to this solution is approx. 10- 15 seconds for each small single ingredient scale installed.

Other options for increasing speed of the batching system could be:

The above-mentioned other options will not benefit from an increased weighing accuracy and is therefore not considered best practice.